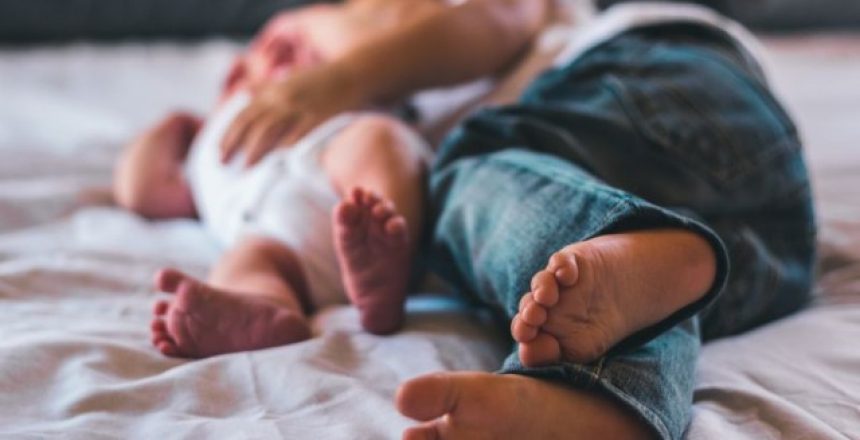 The birth of a new baby is an exciting time for a family, and the excitement can be contagious for everyone involved. First responders don’t often have the chance to participate in something as joyous or emotionally uplifting as a birth, and many wait their whole career to deliver a baby – so when the occasion arises, it is a call to remember.

During the last week of June, HVA medics Mike and Ilea were dispatched to a mother in active labor. Our medics rely on strong community partnerships with local police and fire agencies, and it was just such a partnership that allowed this call to run so smoothly. Ann Arbor City firefighters from Engine 1 arrived just prior to HVA medics. Lt. Kostanko, Firefighter Lalonde, Firefighter Vanderkarr, and Firefighter Eddington were providing patient care and supporting mom through her frequent contractions when the HVA medics arrived on scene. Mom stated that her previous labor was fast and the baby had come very quickly. As her contractions became closer together mom said she felt the urge to push. The team of firefighters, paramedics, and the family quickly determined that due to the advanced stage of labor it would be in the best interest of both the mother and baby to try and deliver the infant at home. Paramedic Ilea shared, “This was my first delivery…my nerves hit me when I realized we were going to stay in the apartment and deliver her baby. Mike asked me if I would like to catch the baby and I reluctantly said yes. I almost said no, but I knew I would regret it if I didn’t.”

The crews coached the mother through the delivery process, and sixteen minutes later dispatch was radioed for a new run number – a brand new baby girl had arrived into the world. AAFD Chief Kennedy stated, “Our crews say the birth went well and both crews functioned seamlessly on the scene.” Ilea said, “I am absolutely in awe of how smoothly everything went. I really don’t think it could have gone any better. Mom truly was a superhero and I am proud of the teamwork between us and AA Fire.”

After the baby’s grand entrance she was assessed and kept warm. Though the baby was breathing on her own, she needed some additional respiratory and oxygen support. While this can be scary for the baby’s family, it is often prevalent among newborns. With the extra help of the responders, the little girl was soon improving.

Once the newborn began to show signs of improvement, several firefighters took over care of the baby while HVA paramedics and other firefighters moved the mother from her third-floor apartment to the waiting ambulance outside. Mom and baby were reunited in the ambulance and were skin to skin for the drive to the hospital. Dad rode in the front of the ambulance with Ilea who shared, “it was so rewarding to watch people become parents and see the unwavering happiness it brought them. I feel lucky to have been part of such an amazing thing.”

Mike and Ilea, along with the crew from AAFD Engine 1 were honored to be at the birth of this baby girl and to provide excellent care for her and her mother. Being present at the first moments of a new baby’s life is a privilege and a call many first responders hope to one day experience in the line of duty.